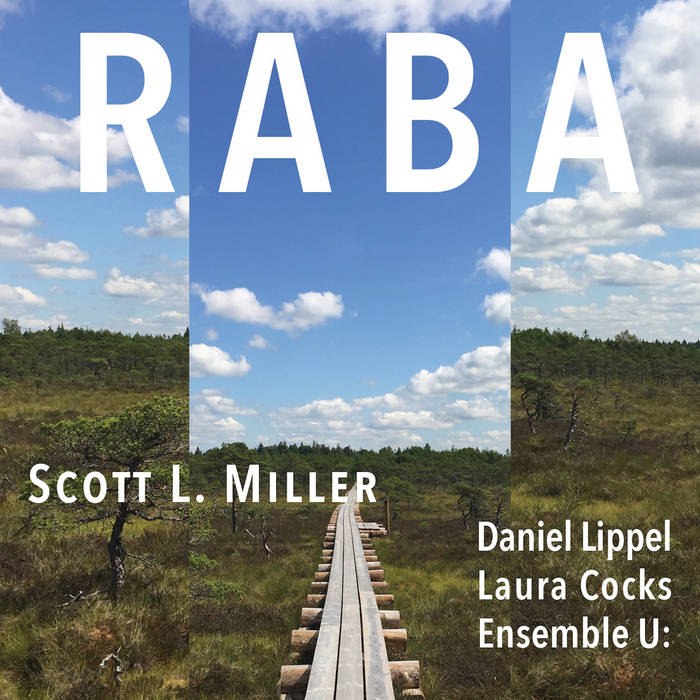 Over the last two decades, Minneapolis based composer Scott L. Miller’s work has increasingly been engaged with ambient sound and music informed and inspired by the environment. This recording, “Raba”, is a byproduct of this artistic direction. Intially conceived as a straight forward retrospective of Miller’s work in the ambient realm, the project has since evolved into a chronicle of his collaborations with performers Ensemble U:, flutist Laura Cocks, and guitarist Daniel Lippel as well as video artists Ted Moore, Mark Zaki, Rosemary Williams, Ron Gregg, and Paul Clipson. In addition to the audio recording, a limited edition DVD is available including premiere video content for all but one of the works, created especially for this release. Not unlike one’s experience truly being inside and hearing the sounds of nature, listening to this entire recording slows our perception to a slower rate of change. Within this context, we can hear the drastically different sound worlds between the individual pieces. The ominous rattling and swishing that opens Autumn Etude is in fact processed sounds of leaves recorded in Miller’s back yard in the autumn. The recordings are processed using a technique called “granular synthesis” wherein each sound is digitally split into minute composite “grains” that contain a seed of the fundamental sonic material of the original source. Miller deftly shapes these granular sounds into a composition with elegant pacing and shape. Raba is both the most conventional music for ensemble on the recording while simultaneously being the springboard for the most cutting edge project — a virtual reality experience that involves a 360 simulation of touring the ancient Estonian bog that inspired the piece. Drone material from an oscillator moves unsettlingly around the mix while Tallinn based Ensemble U: plays slowly shifting lines, building chords that emerge and recede into the fog of the mysterious marsh. Admiration was originally composed in 2008 as part of a video chamber opera, and is inspired by a medieval astronomical clock in Prague. To evoke the slow moving hands of the clock, Miller recorded two colleagues, clarinetist Pat O’Keefe and cellist Jacqueline Ultan, performing a Baroque Sarabande independently of one another. The material is then manipulated and processed, resulting in the ebbing and flowing of the backing track, like gentle waves lapping on the shore. Guitarist Daniel Lippel’s 2017 performance is then layered on top of this pre-existing recording, creating a complex dialogue with the prior versions of the piece and the pre-recorded material. Like Admiration, Hilltop at Montalvo was originally composed as part of a video collaboration and shares the pulsating oscillators that are heard in Raba. In Hilltop however, the dialogue is not between oscillator and ensemble, but with unprocessed field recordings of the natural environment in a interesting juxtaposition of machine made music and naturally occurring sound. Meditation posits a different relationship between live instrument and electronics, with Lippel’s structured improvisation on classical guitar interacting with a modular series of patches triggered by Miller in performance. Sections are demarcated by textural changes or subtle introductions of new pitch material, but the overall work is characterized by a series of sonic incantations or pitch mantras of sorts, intoned over a sometimes unsettling ground. The Frost Performs its Secret Ministry is another work inspired by the environment, literally the impossibly barren character of the Minnesota frost. Miller focuses here on the fragility of the flutist Laura Cocks’ breath, eliciting nearly imperceptible whistle tones that are then imitated in the electronics and guitar extended techniques in this frigid sonic world. Solstice Orrery, inspired by phenomenon of gravitational pull in our solar system, closes this inward looking recording looking out to the cosmos, with a series of episodes highlighting disembodied sounds that evoke life beyond our known reality.

Quelle Chris joins the show to discuss his most recent release, "DEATHFAME"